How does alcohol affect the body?

Remember Alcohol can be dangerous!!!!

Don't drive a horse or wagon or cast any spells while under influence!!!!!!

Mage Enchantment spell lvl 1
Range:                    Touch
Duration:                4d4 turns
Effect:                    A bottle of wine
Save:                     none
Casting Time:        1
The magic-user enchants a bottle of any sort of wine (not spoiled or Vinigar. The wine turns a bit darker in color and the smell becomes richer. The enchantment on the wine lasts for 3 turns and people drinking from this bottle their Alcohol-level is reduced to zero, they become drunk and fall heavily asleep 6 rounds later (all actions till then penalized by 4) and sleep 4d4 hours unless awakened. Only living humanoid creatures with 4+1 HD or less is affected by this spell. There is enough of this enchanted wine to affect 2d4 victims. There will be no hangover effects of any kind. In fact they are refreshed as with a good sleep, whatever the current conditions. 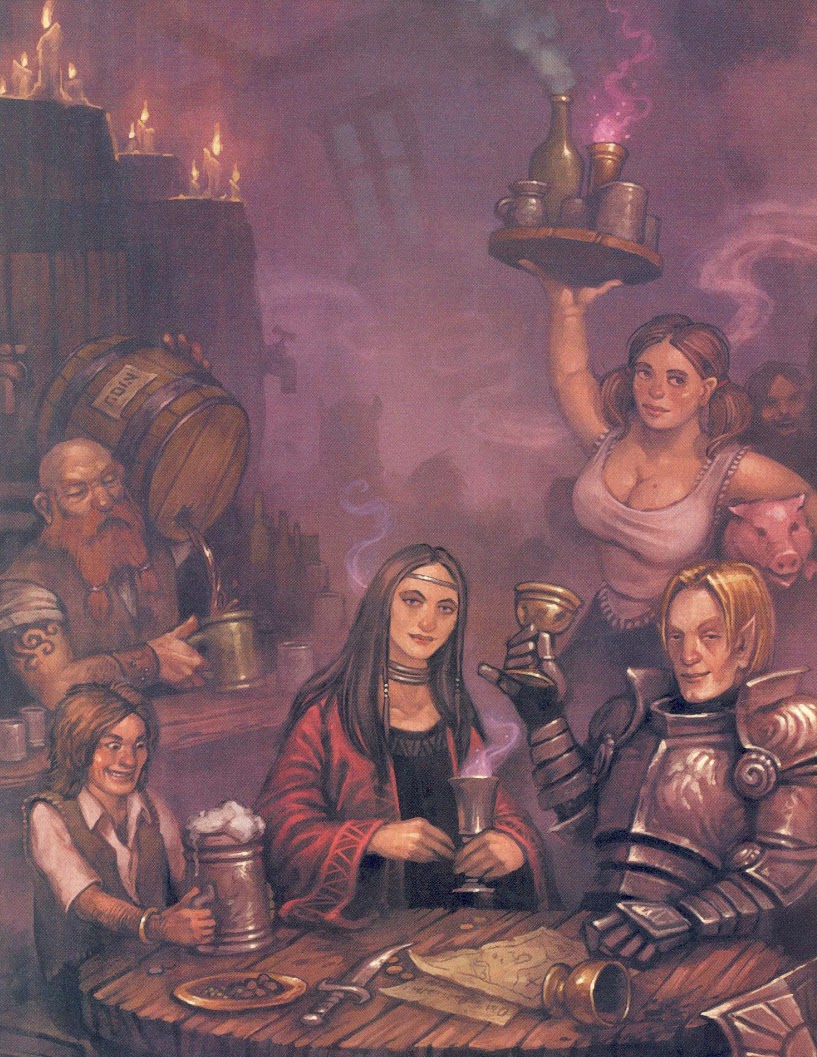 
Drinking  (based on Constitution)

his skill gives the character a talent for absorbing greater amounts of alcoholical beverages without being affected. Drinking is actually an Important skill of many creatures, like Centaurs, developed over many lean years when those who survived were those able to consume much while the edibles were there. A successful check in this skill enables the character to consume a much larger portion than normal. This may then mean that the character can go longer without adverse effects. When intoxicants such as alcohol are involved, a successful check means that the character with this skill gets a+10 bonus per skill used on his Drinking level. (thus if the character has 2 skillslots based on this skill he has a bonus of +20 for his drinking level limit).. The skill takes no time to use.


How are skills used.

ach general skill is based on one of the character’s abilities (Strength, Intelligence, Wisdom, Dexterity, Constitution and Charisma). To know the score of a single skill a character begins with roll 8+1d10, that was the score equal to that from the last teacher, if this is higher than the ability the character has, the score is derived from the used ability instead. For example a character has Intelligence 14, and has a knowledge skill learned from a teacher who had a score of 12 for that skill, then the character will also have only a 12 on that skill. But if the teacher had a 15, his skill score would be 14 basically, his own limit.

henever a character’s skill is appropriate to the current situation, the player rolls a 1d20 against his current score with the ability. If the roll on the 1d20 is equal or less than the ability score, the skill use succeeds. A roll of 20 always fails, no matter how high the chance for success. For example, if the character is riding a horse and the horse is suddenly spooked and begins rearing. The character’s player than rolls 1d20 against his skill score. If the character’s skill ability is a 15, the player has only to roll a 15 or less to successfully use the skill. This roll is called a “skill roll” or “skill check”. A successful check means the character succeeds in the task he was attempting. If a character is trying to track an animal through the forest, and he successfully makes his tracking skill check, then he is able to follow the tracks of his prey. Of course, to use a Skill, the character must have any tools and materials needed to do the job.  A carpenter can do very little without his tools, and a smith is virtually helpless without a good forge. The character must also have enough time to do the job. Certainly, carpentry Skill enables your character to build a house, but not in a single day. Some Skill descriptions state how much time is required for certain jobs. Most, however, are left to the DM's judgment.