I've compiled here some of the D&D tables for use in the game which have become lost in time.
These come from the Rules Cyclopedia, The Basic, Expert, Companion, Master Sets, Various Dragon Magazine articles and The AD&D wilderness and survival guides.
As in all my work of compilation I tried to make them as complete as possible and as usable as possible.
My gaming group uses these several years now, and I found it's time  to make them available to others.

I Hope you can find use in them. Later other Lost Tables editions will be posted here.
Especially EVIL (ahum... aren't we all) DM's can make great use of these to torment their players.
Don't forget to give them  some experience if passing through these dire circumstances succesful.

Chance of finding water
It is practically impossible to start out on a journey of several days (not to mention weeks or longer) in duration carrying as much water as they will need for the trip. It will spoil, evaporate, bug or disease infested, or just leak away, if brought in large cumbersome barrels at a chance of 5% each week cumulative. The characters must be able to find sources of drinking water along the way. This is not a problem if the terrain contains bodies of fresh water (lakes, rivers, creaks, ponds or similar), or if the characters can collect water from precipitation, or if they have access to water producing, or purifying magic. However, sources of magic aren’t always easy to find. On a trek across the desert, a foray into a craggy mountain range, or a sloppy journey through a swamp, characters who don’t have the skill and luck on their side could go for days without locating drinkable water to replenish their waterskins.A single character or a whole group traveling together can make two water finding checks each day, if searches are conducted more often, they’ll automatically fail. Characters with a Survival skill which they made a succesful roll in can make as many checks as wanted. A Search Water without this skill  takes about 4 or even more hours, a same check with the wrong area of Survival, or a failed Survival skill check takes about 2 hours, and a succesful Survival check of the right area takes about 1 hour. However, the table should not be used in any circumstances where water is obvious and readily available. The area searched for is 10.000 sq.yards. Some circumstances are given here. The percentages given are the percentages that water is available.The same percentage must be rolled to find any of this water, but a succesful Survival skill adds 5% per succesful skill point (to a maximum of 50%) to the chance to find. A Water Elementalist or other water bound creature adds another 5% to this roll.

Important Note; Characters need Water as often as described in the Deprivation tables further given.

na means; not applicable, thus the area does not exist, like arctic forest, or Arctic Swamp.


Snow/ice cover
If the ground is covered with snow or ice (as is normally the case in arctic conditions, and usually true at least during the cold seasons in sub-arctic and temperate climates), then water is there for the taking as long as characters ar able and willing to melt the snow or ice. The numbers on the table are when no snow exists. Remember, ice eating will cause dehydration if more than a few chunks are used. 1 cubic foot of ice will produce about 6 quarts of drinkable water, and 1 cubic foot of snow about 2 quarts. A mere dusting does not provide enough liquid.

Nearby body of fresh water
The water of a river, creak, bog or lake has a chance of containing impurities. River or creak water is likely to be pure closer to the source of the river, than it is downstream, by which time the water may have flowed over several mineral deposits or picked up bacteria. Lake water is more likely to be pure at the spot where a river or creak flows into the lake than along the shoreline opposite of the river, where water may have stagnated and become a breeding ground for many kinds of organic and inorganic impurities, fast-flowing water is generally more pure than stagnant water, ground water (found by digging several feet beneath the surface) is usually more pure than water found above the ground.

Spoiled water consumed causes muscle cramps or diarrhea, effectively reducing Constitution by 1. until 1 hour after good water is consumed. A Remove Poison would have the same effect but causes the victim to regurgitate the spoiled water.

Seacoast location
The poet who wrote “Water, water everywhere, and no drop to drink” knew what he was talking about. It is not healthy to drink salty water, a character will become dehydrated from ingesting salt water in large quantities or over a long period of time, because the salt he consumes doubles his body’s need for water. Fresh water may be dug from the ground beyond the tidal line (else the deeper one digs the saltier the water will become). Dunes are well known water filters and contain almost pure mineral water.

Finding Edible plants.or  Fuel
The following tables work similar as with Finding Water. The correct Survival check gives enhanced chances.Other skills, like knowledge of Plants, Know Region, Apothecary, Herbalogy, Fungyology could work similar in their own area of expertise.The search has to be made for either one of the choice of desired plants, i.e.; Medicinal, OR Edible, OR Functionable, and can't be made for a combined search.
Each availability is adusted by the zone the characters are in. The NOT mentioned zones (Temperate) does not need adjustments.
Only skilled (Survival, Sometimes farming, etc.) can decide if a plant is edible. The chance to find indeible plants is double the normal chance. Thus a character might think he or she found edible plants, until the stomach cramps, regurgitating, overal weakness, fever, loss of consciousness and   even a chance of death due poisoning. a Remove Poison instantly removes any ongoing effects (through regurgitating) but damages done hve to be cured by time, or other means. Poison can range from 1 to 10 damage each round, for up to 1 to 10 rounds or death (saving vs poison for half) or use the Poison table.(this will also be given in a next page).
Animal based food requires a hunting skill and does NOT use this table. 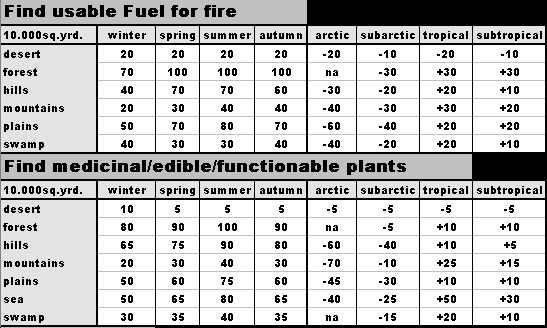 Fuel is needed to make a fire, for warmth, cooking food, boiling water to purify, etc.


Food Spoilage
Food will spoil  in time. This is a law of nature, it will be consumed by micro-organisms. Special treatments can slow this down. Only in a permanet frozen state this proces will be stopped. The food will loose about 50% of its taste and/or consistency if thawed up, by cellular destruction.
If rolled lower than the number needed to roll, the food has become spoiled and is inedible, unpalatable or worse. If rolled the number, it has tghe scent and taste of spoiled food but does cause no harm.
Spoiled food will be regurgitated in 1d8 turns after eaten, Inedible, or rotten food will cause stomach-cramps, regurgitation, and an overall weakness (Str -2,  Con.-2, Dex –2, Cha.-3 Com –3, Int.-4, Wis  –4)added to any other problems like malnutrition. Keep in mind that continoius eating of 1 sort of food may cause Scurvy or other malnutrition diseases.

The usable times mentioned here are in closed, protected packages (Iron Ration=canned, Dry or Elven ratiions=watertight box, Sea-iron, Packed and pickled, Dwarven Ration in Jar or can). when opened normal spoilage rates apply. The numers after the check line are penalties (or bonusses inncase with meats and salt water) to the roll if applicable.example; Elven rations are dried foods, when wet they spoil rapidly. Sea-Iron and Iron rations are as equal in this, as Funghi, Elven and Dried

Food and/or Water Deprivation
How long can a body go without food and/or water. This depends on the physical state of the body and the direct environment. as can be seen in this table. This table is a compiled mixture of the info from the Rules Cyclopedia and the Wilderness guide, added with some real life info (in D&D stats).

A character needs 1 to 2 pounds of food daily (spread in about three meals over the day at best). When a character over a longer period neglects the need for food, or lowers the amount just to stay alive he will slowly lose weight at 1d3x2 % /week less eaten, affecting his corporeal statistics until a healthy natural weight is restored. When a character eats more than he actually need he will gain weight at 3% per week eaten to much. This will limit his abilities accordingly (see weight table). This will also happen when the character eats only, or high amounts of fattening food. Each character needs to consume a basic amount of food and water daily. If he does not, he will lose hit points according the following table.
These levels are tolerance levels. The modifiers for the tolerance level of water are cumulative. When this amount goes below 0, double the daily needed amount for each number it goes below 0. A character needs water according to the circumstances and the activity of the character, spread evenly over the day (at best).

Starvation caused by food/water deprivation
When a character does not follow the advises of food and Water consumption, he will succumb to starvation. This loss can only be recovered by consumption of Food and Water in slow amounts, any faster could result more damage. When the tolerance level of water was a negative, add this to the daily damage the character gets. For each 10 points damage the character gets his abilities drop by 1 point (Str., Int., etc.). 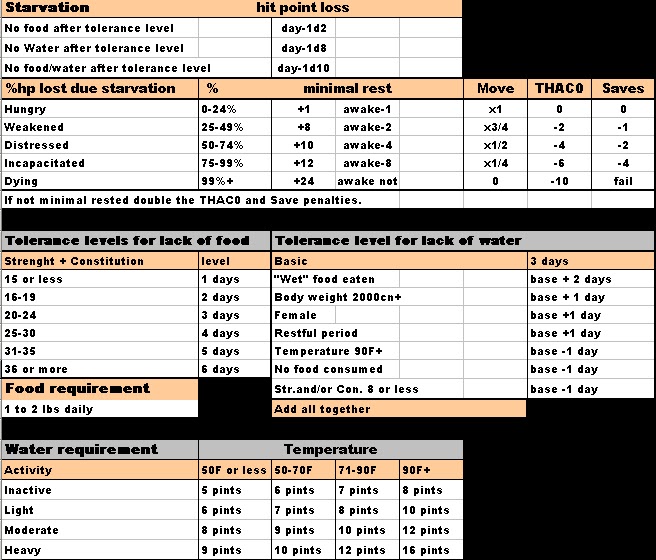 Minimal Rest is normal 6 Hours. Awake is the roll needed to awake the person in question. this is rolled on his or her Constitution. A person which lost 99% of hus or her Hp due to starvation does NOT awake when fallen asleep.

Tolerance levels  for lack of food is the character's Strength and Constitution added together. This is the base after which the starvation damage begins, if a continued deprivation is in effect.
About 1 LBS is needed daily.

The Base of Water deprivation is the given basic value, with the modifiers added. When the requirements are higher than what the character takes in, he or she will suffer water deprivation after this time.


Until the next episode.