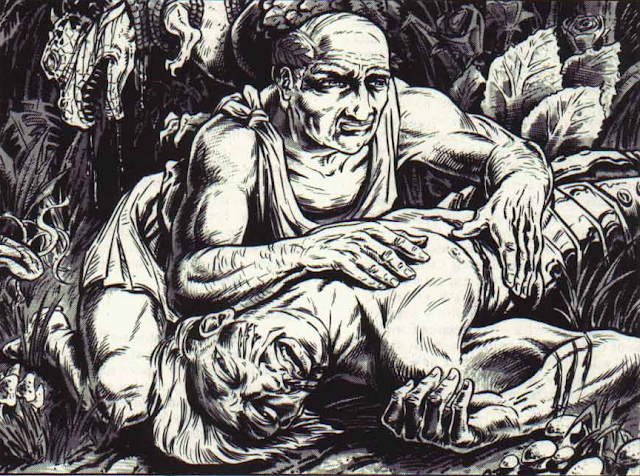 Healers, as the name implies, are designed to allow rapid repair of other characters. The Healer has therefore special abilities and special spells that allow them to do this. No Healer can ever chance his class on his or her own volition. The Healer has a special set of spells exclusive to his own class, but can Turn Undead as a normal Cleric. Even in saves and hit roll they are equal to normal clerics. In any not mentioned case use the cleric statistics instead.

Minimum scores of 15 each in Intelligence, Wisdom and Dexterity.
Healers can only be Lawful or Neutral. A Chaotic Healer is not possible, and when a Healer turns Chaotic due some magical effects he will turn out to become a mere fighter with no abilities remaining to either c
-One Knowledge Skill as:     Knowledge of Plants and Fungi
or Knowledge of Diseases and Afflictions
or Knowledge of Races
-Alchemy
-One Healing Skill as:        Healing
or Veterinary Healing General
or Veterinary Healing Specialized
-One Profession Skill as:     Chirurgy
or Apothecary
or Anatomy/Taxidermy
Later Skills may be chosen from this list, but also other skills may be chosen. But only these skills grant the Healer an extra bonus of 1 on the skill checks. All other skills are penalized by 1, except knowledge skills.

Healers can’t wear any armor or shields, bracers, and as normal only one protection device.
The spells they are able to cast can never be used in a harmful way, so a “Cure” spell can’t be turned in to a “Cause” spell, etc..

Special abilities are conferred upon the Healer at several abilities as according the following table, any experience and Saves or hp are as per normal Cleric class.

Cures 1d6+1 healing points, but he can close only minor wounds of up to 7 damage, any wounds with more damage will reopen with movement and the healing has failed completely (except when rested for at least 1 day per 1+ Constitution bonus hit point lost).
So the Lay on hands will cure several wounds completely as long as they do not exceed 7 points.
This ability doesn’t remove any other afflictions. So when a bear attacks a character with claws for 5, and 6 and bites for 8 damage, and hugs for 6, only one of the claw wounds can be closed, an attempt on the bite will stay closed it for as long as the patient doesn’t move or otherwise exerts himself.
The Hug damage will not be healed since this is crush damage and not a wound.
Thus it is also useless to do this on poisoned, sick, crushed, paralyzed creatures, since it cures only wounds.
The Healer can use this ability once per positive Wisdom adjustment point, even when he has no spells.

At distance the healer will be able to detect the presence of slimes or molds by smell and sight of the environment, but not the species.

The healer can detect the presence of a disease in a patient, it’s direct living area, and (DM) the whole nearby affected environment on sight or smell, only.) But this doesn’t reveal what disease, a special healing skill check or spell and lots of Time are needed to recognize diseases or infections.

Use Rods and Wands

The healer can from now on use rods and wands usable only to Magic users with a 5% chance of success/level above 16 (-2 per failed check, cumulative per try.). Any failure will result in not being able to use the item at that moment.

The healer can now learn to cast magic spells in addition to prayed spells (spellbook needed!!, often the prayer book is used instead) on a successful Intelligence check and tutoring (by a Mage of at least level 9) in the spells to be memorized. These 4 spells can never be exchanged for any other spells, and all four must be learned at the same Time. This learning takes three times as long as a magic-user would need to, with only half the chance of success, at double the normal costs. This all due the difference in working with magical forces between the two classes.
Some spells will be made available to Healers at different levels of powers when they follow a specific Immortal.
These spells can only be extra spells if the description at the Immortal’s notes say so. Mostly a spell will be made unavailable to the Cleric for the spell to become available.

Reversed spells can only be cast by Evil or Chaotic casters, with only a few exceptions; Darkness, Free Person, Barrier, Snakes to Sticks, and when the Immortal (in the guise of the DM) allows it temporarily. Obliterate and Slay Living can however be memorized and cast at Undead creatures.

The Colors and symbols used in the list have different meaning, as explained in the List Legend.
Uncommon, Rare and Very Rare spells are normally not found at the local Clergy, the percentages given are the chance that a single specific temple knows this version of the spell.
Elemental spells (Energy, Matter, Thought, Time,) and Alignment spells (Good, Evil, Chaotic, Nongood or Evil) can only be cast by those of the given immortal’s element and alignment, often the cleric has to have this alignment too, to be able to memorizeand cast the spell.
Aquatic and savage coast spells can only be found in these regions and are a rare to very rare or even completely unknown in any other areas.
Quest spells are rarely granted by the Immortal, and then only when requested (the cleric thus must have researched and found information about the spell) and the immortal justifies the usage of the spell in the specific conditions the cleric requires (sometimes, the immortal will give the cleric the spell requested, but specifically forbids the usage elsewhere or when). 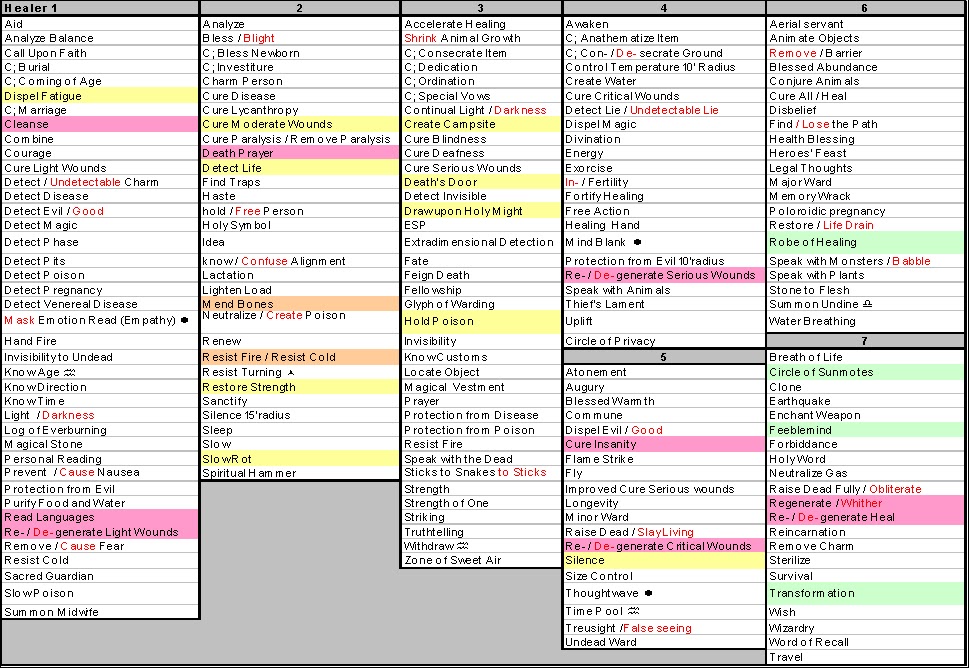