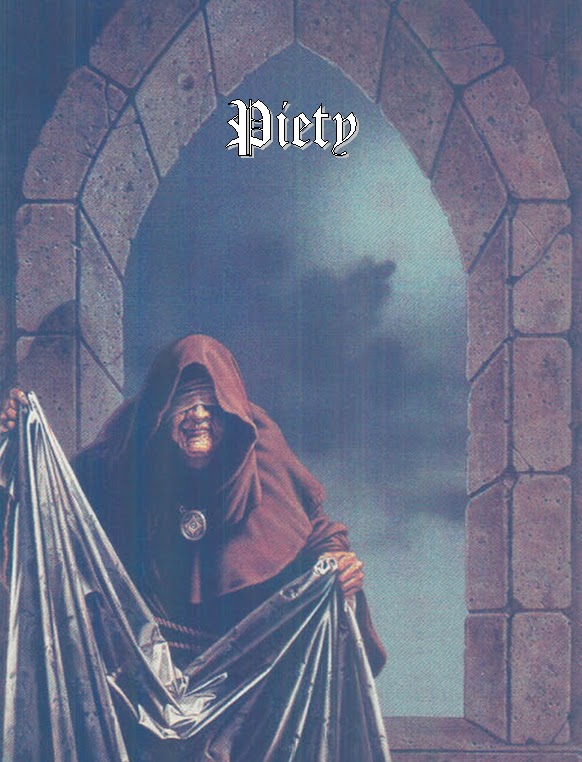 A Character Piety is measured by piety points, which are gained through pious acts and lost through Impiety. The current number of Piety Points determines the piety level. As with experience levels, increased Piety brings more benefits that “kick in” at discrete intervals. Unless experience, however, it is easy to lose Piety and drop a Level. The listed Piety Points (Pip) are the minimum necessary to enter the corresponding category. All followers of an Immortal begin Pray with 1 point of piety in their given Faith. All servants (Clerics, Clerics, Paladins, Avengers. Healers, Shaman, Shamani, Masters, Druids, Knights, and Dervishes) begin with 1d4 Pip. This rule is only used for entry in a new religion after successful initiation rituals.
A beginning character determines his current beginning Piety according the table here, from “In The Line of Duty” with the ability trait Reverent. At higher levels of Piety, all followers and servants gain with special powers and advantages as a sign of divine favor in the fight against the enemies of the faith. All benefits of piety are cumulative. The character’s effective power level with any granted ability is the same as that of a Paladin of the same experience level (that is a 1/3 of a Cleric). Example; A pious follower of Odin is a Bard level 12. He is given the major ability to Turn Undead. When he does, he has the same chance as a Paladin of the same level, thus as a Cleric level 4.
A character’s Piety represents the protective aura placed around him by his Immortal. This aura is usually invisible to Mortals (thus can be seen by Second Sight), but may be detected by appropriate spells. All extraplanar servants of the character’s Faith (Guardian Angels, Souls on the search of a body to be Reincarnated, etc.) automatically know his current Piety level (not number), and extraplanar servants of other faiths can detect his Piety level by making a successful Wisdom check. Extremely Pious characters (Piety level 100 and above) may become noticeable to the casual observer after a Wisdom check (may be repeated each day). The nature of the aura will generally reflect the character’s faith. For example. A follower of a good aligned faith may radiate a feeling of peace and goodwill, while a servant of evil may radiate a chilling unease.

Character’s receive Pip gains or losses at the same Time the they receive experience points, when the events of the adventure are still fresh in the minds of the characters, and of the Immortal (even Immortals look only rarely more than once a day upon their followers). Since different faiths have different demands, these are listed under each Immortal separately. To calculate Piety awards, simply add all applicable awards and penalties to determine a number.

There should be a strict limit on how many can be gained, and as thus no more than 10 Pip are gained each month maximum. Note that one act could have many consequences. For example, robbing a poor box is both “theft from a church” and “Harming the Weak”. Any number of Pip can be lost during any amount of Time, according to the character’s behavior. Canny characters will plan their actions so as to minimize Piety losses and maximize gains (killing only in a good cause, doing a few extra good deeds to make up for a lapse, etc.). Add up all awards to the character’s current total, and apply all results immediately.

Transition from one level to another is a major event in a character’s life, and most Immortals may wish to throw in some sort of sign or omen (a pleasant or disturbing dream, an unpleasant bit of weather, etc.).

If the total Piety Points are reduced below 0, the character’s Piety remains 0, and a divine Curse is placed on the character as a warning. A character who commits a further offence earns a further curse for every three such offenses (rounded down). If this is the first Time for the character, a good or tolerant (or ignorant) Immortal may let him off with a warning, and the curse will only last one day. Otherwise, all curses are permanent until the character has atoned for his deeds. Although a character may earn enough Piety to go above 0, all curses remain until the offence that triggered each one is atoned for separately.

Although all Immortals and their faiths have much the same categories of awards and penalties, each Immortal will have specific behaviors that earn each one. For example, although all Faiths require some sort of regular ceremonial observance, the exact nature of the observance can vary widely, from some private meditation to wild festivals. Each Immortal can determine the specific actions that will earn each award or penalty in his or her Faith.
A character may be not content with his Immortal, its faith and its rules and restrictions, and as thus might want to change to another religion or faith (and thus Immortal) without penalty. When he is divinely cursed, however, only opposing Immortals will accept the character without proof of loyalty to the chosen faith. When accepted by another Immortal all divine curses may be removed if that Immortal wishes so, or later as a period of training and acceptance.

Some characters don’t follow any Immortal, and as thus don’t have any piety, nor religion, or faith. The Reverent skill is always below 6 at best. These characters will have no problem by any Immortal rules, they have no Immortal or religious based rules or restrictions. These characters will mostly be either true Neutral and well balanced, or Chaotic and absolutely uninterested. No good or Lawful character could become a skeptic. Skeptics have much penalties, most positive based spells will not work on them. All these spells have only a 25% chance of success on the character (this includes any healing spells), as the Immortal, refuses to spend his might (the power of the spell send through his loyal follower; the casting cleric) without true cause.
The cleric must explain this explicitly beforehand or soon thereafter in his prayers or he instantly drops in Pip 1d4 points, depending on the mood and character of the Immortal in question. Negative based spells (Blight or Cause Wounds) work normally. The skeptic character has no restrictions of entering any temple, holy ground, or similar. But can’t activate any clerical magic from items (Good or Bad), and is not affected by positive clerical shrines or holy powers. These characters often become marionettes of the powers of Entropy, as Immortals often aren’t interested in them. Entropic Immortals misguide them with trickery, guile, and outright lies to enable acts no follower of them (or other Immortals) would do. Skeptics also can’t become Immortal, as some Immortal power must guide them, alter them. If trying to become Immortal, they often follow the trail of Entropy, unknowingly, unstoppable, slowly guided toward Chaos, Death, Destruction or Evil.

In addition to its other uses, the Religion skill automatically gives knowledge of mandments and prohibitions and associated piety gains and losses) for the owner’s faith. A successful skill check gives the same information for other common faiths in the area. NPC clergy spend a lot of their time using this skill to give guidance to their flock. However, such guidance is only the owner’s “best guess”, and may or may not be the actual intent of the Immortal.

Common Awards and Penalties All Followers and Servants 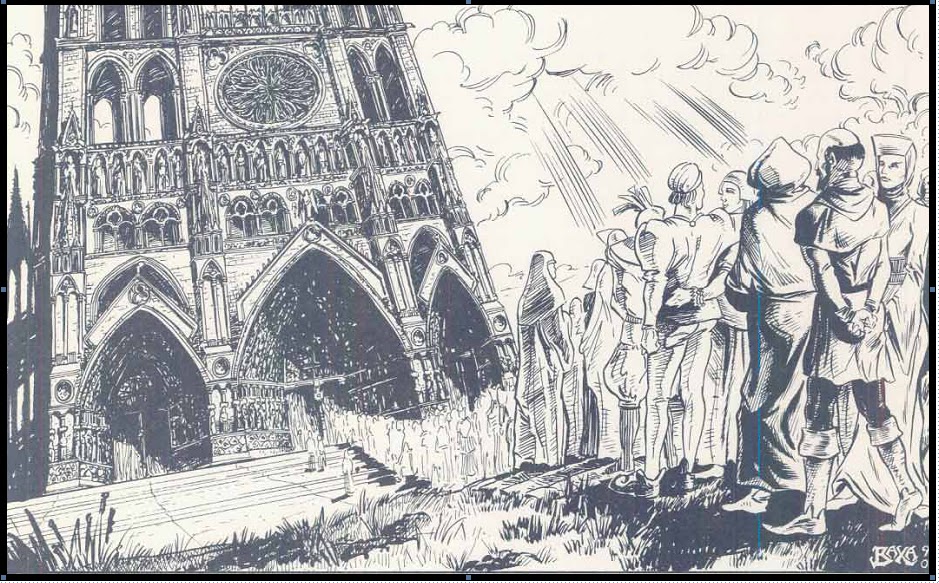 Tithes a percentage of all income

Specific requirements must be determined by the Immortal, but may include building the structure alone and by hand, spending 100 gp or more, consecration of the site by a servant of the faith, or placing the shrine in a specific location (such as a bridge, road-crossing or t-split, or in a forest). Characters rarely gain Piety from constructing more than a small shrine per month.       +1

Aiding Servant of own Faith

Assist a Servant in their duties or Quests, without Thought of reward.         +1

Harms Servant of own Faith

Harming or impeding a member of enemy Faith

An “enemy Faith” isn’t just a Faith that isn’t an ally…it’s a faith that is actively opposed to yours, and whose servants work to harm yours. Highly intolerant Faiths regard all other Faiths as “enemy” (the Immortal Vanya shows such tendencies, and Thanatos is almost to any Faith an enemy).               +1